According to the new legal docs, “BRITNEY is strongly opposed to JAMES continuing as sole conservator of her estate. Rather, without in any way waiving her right to seek termination of this conservatorship in the future, she strongly prefers to have a qualified corporate fiduciary appointed to serve in this role.”

The Blast also reports that Britney may be considering filing to terminate the conservatorship once and for all but that she still hasn’t filed that specific motion. Britney’s lawyer, Samuel Ingham, wrote: “Without in any way waiving her right to seek termination of this conservatorship in the future, BRITNEY would like Ms. MONTGOMERY’s appointment as conservator of her person to be made permanent.”

Of course, they are sure that Jamie will try to stop this from happening.

“For many reasons, I have concluded that any effort to achieve my client’s objectives as stated above will be aggressively contested by JAMES,” the filing states. He continues, “BRITNEY herself has expressed to me a desire that we associate an attorney or law firm with substantial expertise in handling contested litigation in a highly complex case such as this one through trial.”

Another important part of this new filing is that Britney’s conservatorship was diveded into 3 phases:

“We are now at a point where the conservatorship must be changed substantially in order to reflect the major changes in her current lifestyle and her stated wishes.” he continues.

“Based on the foregoing, I respectfully recommend that this court seek input from all parties and make appropriate orders to facilitate the implementation of my client’s wishes as stated above, which I also believe to be in her best interests.”

THIS IS HUGE! Don’t forget that it won’t be easy to end the conservatorship because tt has lasted more than 10 years and there are millions of dollars involved, so it will take time. Let’s hope this is a step in the right direction to end this abusive conservatorship. She first needs to get rid of the abusive people in her team (Hi Jamie, hi Lou!). Oh, and “phase 3” basically confirms the rumor that Britney is refusing to work as long as Jamie is still involved.

For now, a new hearing will be held tomorrow and don’t forget to help and promote the #FreeBritney hashtag.

Thanks to @lawyersforbrit for the court doc photos! 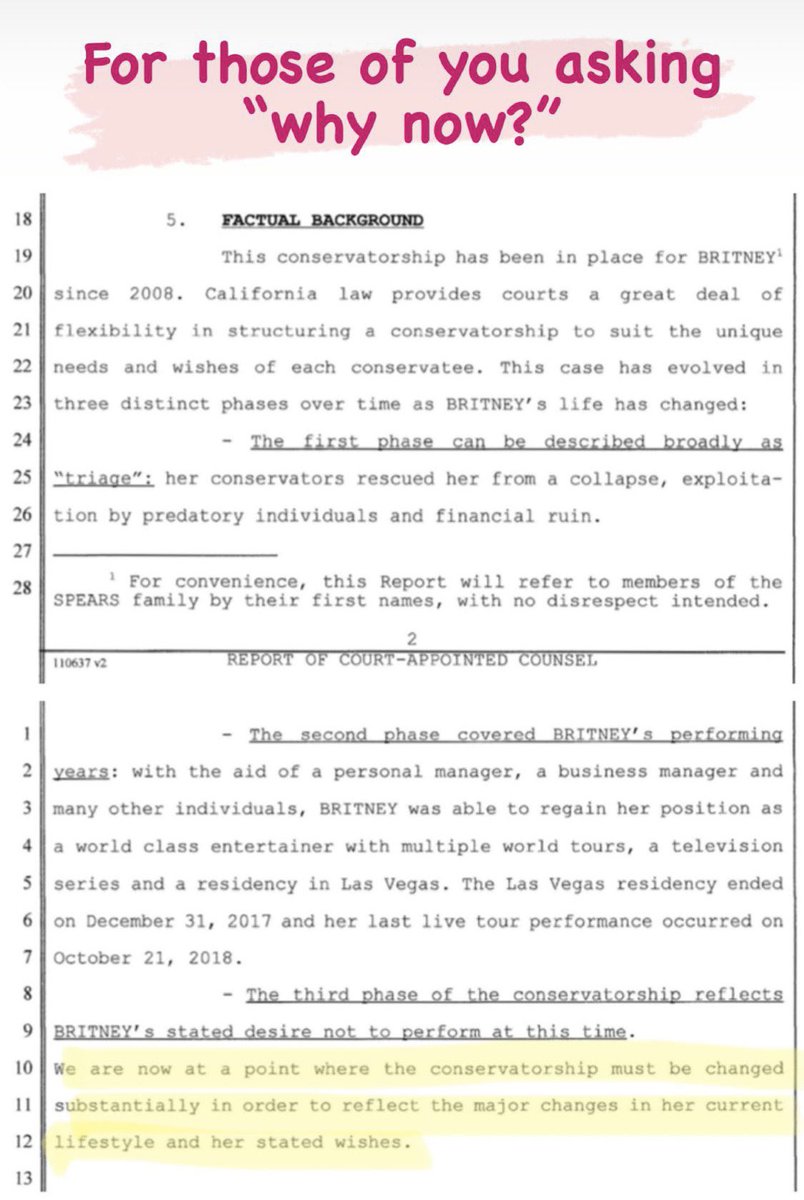 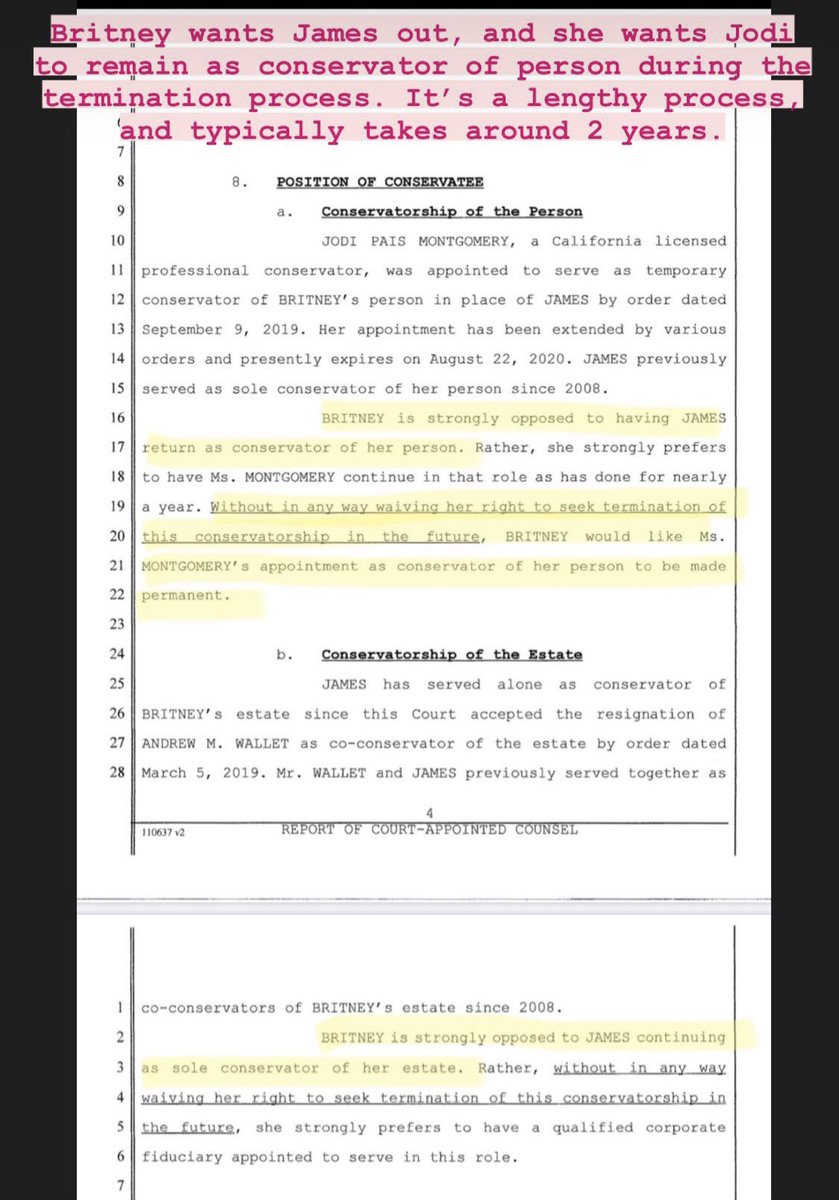 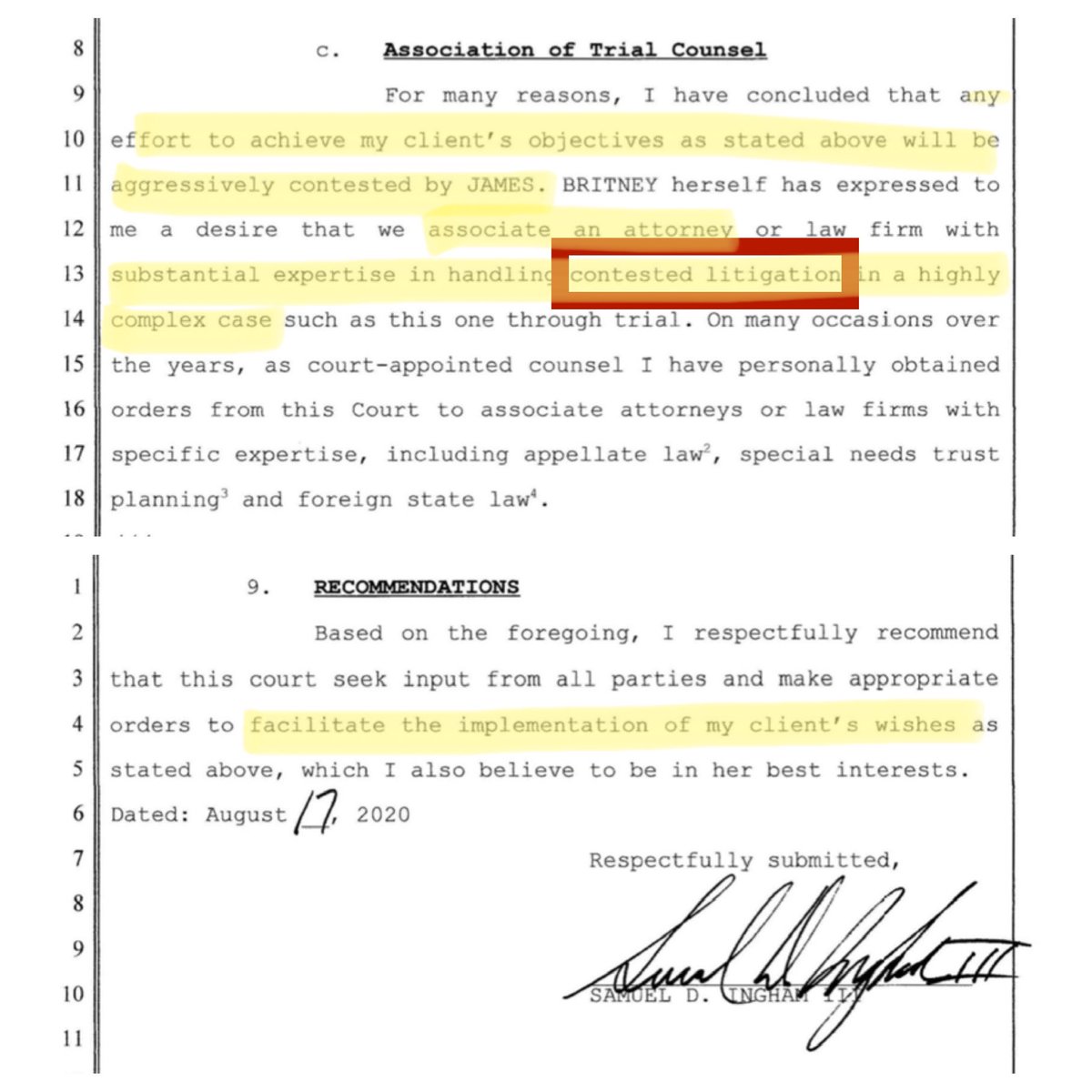 EDIT: Here’s a thread with a great break down of this new filing. Thanks to the Gram Girls!

Today’s report to the court by Sam Ingham in which he relayed Britney’s strong desire to remove Jamie Spears as conservator is huge news! We could not be more proud of Britney and Lynne! After talking to our legal consultants about the document, we have some takeaways to share.

New picture of Britney in the recording studio!
“Piece Of Me Tour” is one of the 100 highest grossing tours of 2018!