This is beyond heartbreaking. A few hours ago the Daily Mail posted this never seen before letter written by Britney around 2009 and 2010, in which she tells her truth about her divorce from Kevin, the bathroom incident in January 2008, the conservatorship and how they are threatening her with her child visitation rights.

About the letter, the Daily Mail says that it was given to a member of Brit’s camp between 2009 and 2010 and that “the insider told (us) that Spears wrote the letter to clarify the circumstances surrounding her psychiatric hold in 2008 and to give her side of the story. I think she was frustrated with what was going on and what was being reported and said. She didn’t usually get a chance to speak her mind and be heard. She is thoughtful and sweet.”

And according to this insider, Britney’s concerns about being managed and taken advantage of by the people surrounding her still ring true today.

“After reading Kevin’s article in People I was amazed at how a lot of the focus was on Britney their mother to sell a story for People magazine, instead of the focus being on Kevin.

What happened to Britney was a year ago and people need to get with the times. And as far as Kevin saying Britney divorced him, she was forced to by her lawyers b/c she went to visit him in N.Y and he wouldn’t see her and the children and her lawyers said if she doesn’t divorce him he’s going to do it himself. So Kevin trying to play the innocent victim is hardly irelavent [sic]. He left her and the babies.

Her going on the mend partying two years ago has nothing to do w/ the situation now. She is a completely different person and most of their fighting was done back then b/c of his problem waking and bakins to marujuna [sic] at 5 in the morning.

No one talks about these things b/c no one knows the truth.

Her behavior when her children got taken away b/c of her locking herself in the bathroom is understandable considering her friend at the door kept telling her ‘the cops are leaving don’t worry stay in the bathroom’.

She was lied to and set up. Her children were taken away and she did spin out of control which any mother would in those circumstances.

Her next visit took a toll as well, she wasn’t listening to her manager – he lost control so he wanted to scare her.

Now this year Britney has been silenced to speak about anything that’s really going on. The people controlling her life have made 3 million dollars this year.

She would love for new eyes to see her situation, but if she brings it up she’s constantly threatened that the conservators will take her kids away. So how long does this go on. As long as the people are getting paid and she has no rights it could go on for a while, but it doesn’t make it right at all.

Everyone is very quick to put a gloomy eye on Britney. Does everyone talk about Janet Jackson giving her baby to her brother hopefully she won’t do it with this child.

Britney has given her brother a 2 million dollars apt. Her mother a 4M estate in Louisiana and her father the best job in show business. She’s a very giving person and would love to get the respect she deserves.” 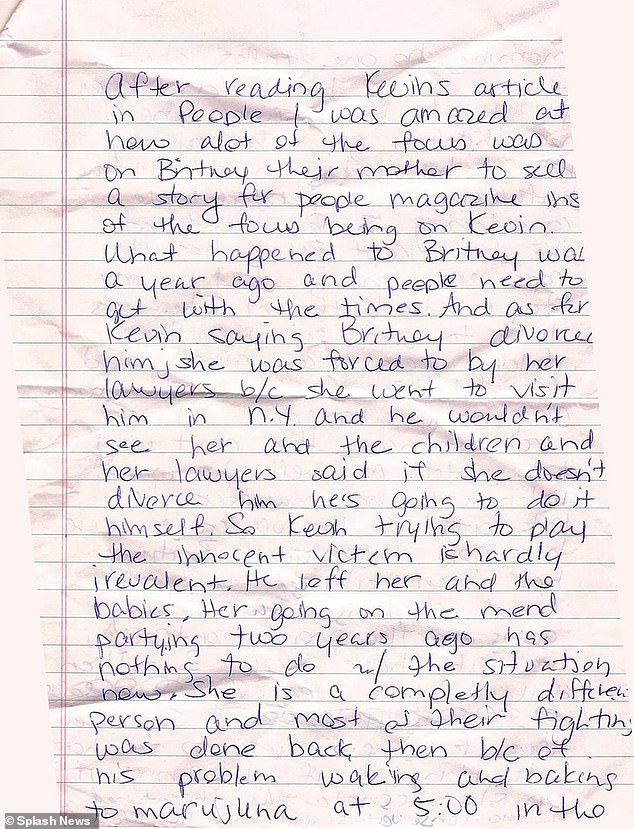 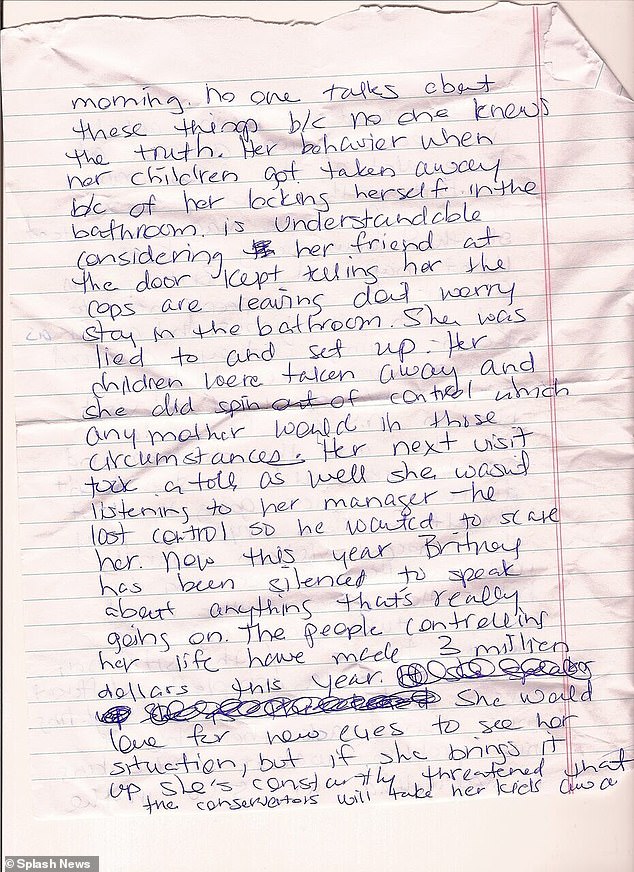 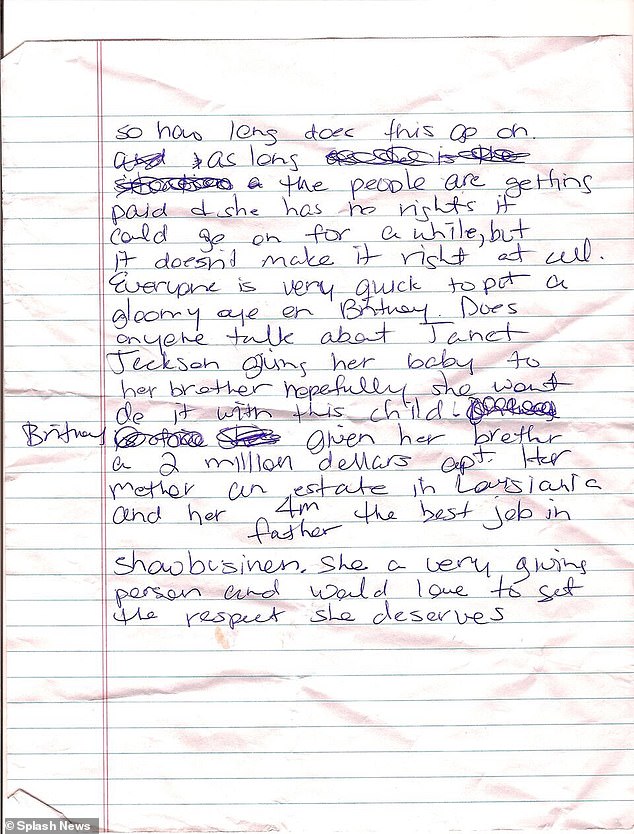 I could highlight every single part of this letter because everything’s important and, as I said in the beginning of the post, it’s heartbreaking. And this was written in 2009 or 2010, imagine how she must be feeling now, 10 years later.

And don’t forget that this isn’t the first time that Britney has mentioned that her team is threatening her with taking away her kids, remember the leaked 2009 voicemail? This is just another proof of how dirty her team is.

The insider also told the Daily Mail: “I think she is a very sweet person and would like to have more control of her life. Or at least not feel like she has to ”work” to prove to the conservatorship that she is healthy. Many times she told me she wanted to focus on her family and it seems like they wanted her to keep working.”

Asked if they were concerned for Britney’ well-being, he said: ‘To some extent, yes. I want her to be happy and to have people around her that love and care for her. If she wants to stop working and focus on her family then she should be able to. Using her kids against her in order to make her earn more money for the team doesn’t seem to be what’s best. I only know what we spoke about back them, but it seems to this day that she doesn’t really want to keep doing these shows where she doesn’t perform at the level she used to. It would be nice to see her be able to perform if she wants to. And if she doesn’t to just enjoy life and her family and friends.”

I’m honestly speechless and it’s unbelievable to think that she’s been living like this for 11 years. This is clearly Brit’s handwriting and even when it’s weird that it’s written in 3rd person, I think it’s not the first time she does (or maybe i’m confusing her with someone else). I don’t know how is this going to end but I wish Brit nothing but the best. This conservatorship and abuse must end ASAP. She needs her civil and human rights back, she doesn’t deserve to be abused by this money ridden team.