Another Top 10 for Britney! “Private Show” debuted at No. 9 in Top 10 on Billboard + Twitter Top Tracks chart. After the release of the music video, Make Me reached the No.6. Congrats, Brit! 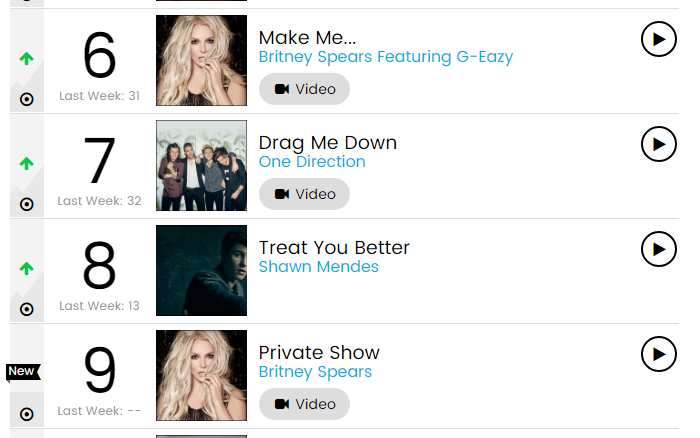 Britney Spears grabs the top debut on the Billboard + Twitter Top Tracks chart (dated Aug. 20) as “Private Show” starts at No. 9 after its official release on Aug. 4. The superstar first teased the cut in ad for her perfume of the same name on July 11, before promoting it as an instant-gratification track for pre-orders of the song’s parent album, Glory, due Aug. 26.

Billboard + Twitter Top Tracks is a weekly ranking of the most shared and/or mentioned songs on Twitter in the U.S., ranked by the volume of shares over a seven-day period (Monday to Sunday).

Spears has a second song in the top 10, as Glory’s lead single “Make Me” rockets 31-6 following the release of its music video on Aug. 5. The clip has surged to 11.4 million global views on YouTube through Aug. 11.

A lot of chatter on Twitter was generated not just by the arrival of the new clip, but in how some fans were displeased with the video. It was reshot with a new director and differs from what Spears teased to fans via social media in June. Upset fans launched a petition on Change.org, asking to have the original video released. Through Aug. 11, the petition collected 15,000 signatures.

The triple-play of Glory’s release date, the “Make Me…” video and “Private Show” debut combine to fuel Spears to a 222 percent gain in Twitter mentions, which hit 143,000 for the week ending Aug. 7, according to Next Big Sound.