Welcome to Britney Spears Fan your best online source on everything about Britney Spears. Here you'll find her latest news, photos, videos and many more on her carrer. We have a photo gallery with more than 250,000 photos and growing! We hope you enjoy our site and if you have any question please feel free to contact us. Thank you!
Published on In
Interviews News

Here’s a recent interview with Britney published by Billboard. 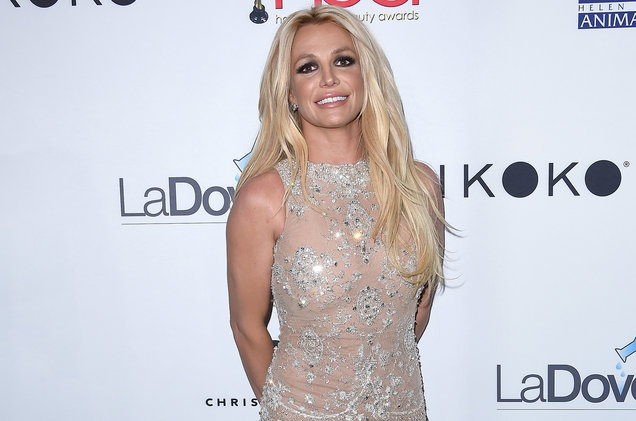 If you thought the workout videos Britney Spears recently posted on social media looked grueling, the pop superstar confirms that they were — even if she and her trainer boyfriend made it look easy. Spears and Sam Asghari went through intricate movements, including Asghari lifting Spears several times and Spears doing a headstand — and it seemed effortless. But in reality, Spears says he put her through it.

“He’s a trainer so everything has to be so perfect. We probably did 40 (takes) and I hurt myself,” she joked in an interview with The Associated Press. “It looked great, he did a good job and he edited it really, really well.”

She said she’ll often tap her oldest son, Sean Preston, to shoot her videos and photos for social media and those are usually in one take.

“With (Sam), I did it a million times and I swear it was horrible, but when I do it just with my kids it’s really fast,” she said.

Spears said she prefers challenging workouts because she has “always been an active person” and gets bored easily. She plans to ramp up those exercises in the coming weeks as she prepares to return to touring with the “Piece of Me” tour, sponsored by Pepsi. She’ll also be one of the superstars included in the Pepsi Generations summer campaign where the company will reissue retro cans featuring acts that have participated in earlier campaigns, including Michael Jackson and Ray Charles.

Spears’ tour takes her Las Vegas residency on the road and will be the last opportunity for fans to see that show. She’ll perform dates across North America and Europe. It kicks off July 12 in Washington, D.C. The singer said she looks forward to getting back onstage because it helps bring her out of her shell.

“I’m very sensitive and sometimes I just want to run away because I’m a very shy person,” she said in a phone interview Wednesday (May 9). “I think energy is contagious and when I get onstage with the dancers, we all kind of vibe off each other. We feel the same energy and we connect.”

Watching Spears perform, it may be difficult to imagine that she may not be outgoing, but she said she has a stage persona that takes over in front of an audience. “I think it’s healthy to be able to put on the persona of being confident,” said Spears, who also said she’s on a kick of reading self-help books.

“I think it’s an escape because honestly with how shy I really am, I don’t think it’s healthy,” she said. Performing is “a boost to my confidence. It’s like an alter-ego type thing. Something clicks and I go and turn into this different person. I think it’s kind of a gift to be able to do that.”

Old Britney’s demos leaked: Cover Of Whitney Houston’s “I Have Nothing”, “Luv the hurt away” and more!