Welcome to Britney Spears Fan your best online source on everything about Britney Spears. Here you'll find her latest news, photos, videos and many more on her carrer. We have a photo gallery with more than 250,000 photos and growing! We hope you enjoy our site and if you have any question please feel free to contact us. Thank you!
Published on In
Interviews News Photos Photoshoots Scans 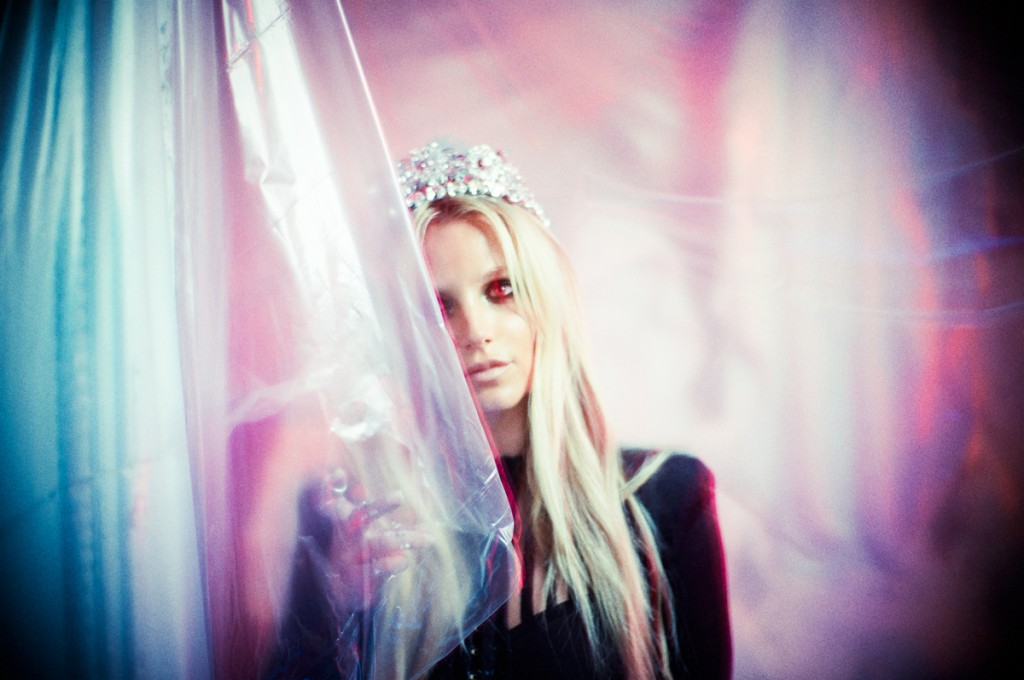 “I don’t understand your question.”

Dumbly, I have asked her something risky. I think I’ve asked her why, after everything she has been through, she still chooses to put herself back out there, exposing herself to so much scrutiny and all of the predictable and unpredictable ways in which we—the public—decide to lift up or tear down our most famous fellow humans. It’s a risk she can avoid simply by quitting.

“What is your question?” she asks, leaning forward from the couch we’re sharing.

I attempt to restructure what I’ve put forward, leading it along. “You’re going to keep performing despite what comes?” I propose, suggesting there may have been some hurdles teed up before. She runs with it.

“Oh, well, yeah, I have a great security team with me now,” Spears says, her eyelids still coal black, smeared with makeup from the photoshoot. “I think with a lot of things in the past, I didn’t have security. I didn’t have the guidelines that I have now, which are brilliant. I’m very close to my security team. I have kids now too, so everything is on a way lower scale. I’m actually a very boring person. I don’t go out. I don’t really do anything. I should be Mother Mary, seriously. I think my life has done a complete 360. Things are just different now. It’s a different time. It’s a different era.”

Referring to the biblical Mary isn’t entirely off topic. For today’s cover shoot, she posed in front of a specially constructed altar containing—among other famous figures from history and popular culture—the Virgin Mary. After the shoot, she politely, if a bit skeptically, describes the altar as “an interesting set, with Mother Mary, who I bow down to.”

Of course, this remark leads us directly into holy land.

“I believe in an afterlife, of course. I’m a very spiritual person,” she says. “I believe in heaven. I believe we’re all here for a reason. I think we’re here just as people to pass it on and pass our information on to others, to inspire as much as we can. Inspire every day. And just to be good people, you know? And give back and help others.”

It’s a worthy sentiment and more revealing than maybe anything she will say this afternoon. However, the question posed was not about her religious convictions, which, after all, are none of my business. I had asked her about her own legacy, that in a year when we’ve lost so many notable icons—from David Bowie to Prince—if their passing has made her think about the mark she will leave behind, if she has any hope that her work will endure as theirs most surely will.

“It’s funny, because I don’t really listen to my music,” she says. “My kids do and my nieces do. I’m about the creative process. I’m in the moment of being creative and then I put it out there. Of course, I sing my songs every night [at her ongoing residency at Planet Hollywood in Las Vegas] and I have to listen to it that way, but I’m all about change. And new. And forthcoming. But, there is a part of me in my music and I hope, for my fans, that they can have that part of me when they hear me on the radio, or buy my CD, or whatever they do.”

Earlier, I had congratulated her on the strong showing of her newly released YouTube lyric video for Glory’s lead single, “Make Me.” In a few days, it had racked up millions of views, proving there is still a hungry audience eager to hear new Britney Spears music. Her reaction, in some ways, parallels her “whatever they do” obliviousness to how people consume music 17 years since she debuted with “…Baby One More Time.”

When I attempt to gather more details about her new album from the source itself, she is equally unaware.

“It’s done, but I have no idea when anything’s coming out.”

Of course, the man seated behind me knows everything. He’s been monitoring the conversation closely and has likely checked multiple times today to see just how many views that video has tallied and could feed us the figure to the decimal, as well as the day and date of the album’s release, the entire track list, and in what order the songs will be released as singles. Shit, he probably has the entire album somewhere in his phone. We could all just listen to it now and absolve ourselves from this thorny mystery. So, whether Spears is just being coy, or really is so sweetly unaware of the plans being made on her behalf, the truth will not be found out on this hot day inside this cold trailer.

She reaches toward the clear, glass coffee table and slides the digital voice recorder closer, looks at the time elapsed, and asks, “Is that how long we’ve been talking?”

“Oh, then we have two more minutes.”

She has summarily overruled her own publicist, who had promised us both a full half-hour of conversation. Giving a quick glance over my shoulder to gauge his reaction, he nods and gestures as if to say, “I can’t help you. It’s up to her.”

In this otherwise insignificant moment of simple logistics, Spears lets down her guard. The ace in her deck might not be showing, but there’s a queen hiding in there somewhere. This is not the fragile, micromanaged figurehead of a brand called “Britney Spears.” This is a 34-year-old woman ready to re-set the world on fire on her own terms.Glory indeed. How naïve to think I’ve had to tiptoe around this idea of her, while the woman herself has been maneuvering this brief encounter to meet her own specific needs. How arrogant, too, that for a single moment, I thought any of this was in my control. The puppet strings have been clenched firmly in her fist this entire time. I’ve been played.

Days later, I’ll receive an email with an attachment. It contains the full album notes forGlory, but not the album itself, of course. Among the credits listed is one for “Head of Security: Edan Yemini.” Among her long list of thanks, she singles out a company called Black Box Security.

After our remaining two minutes together elapse, I jokingly refer to this as the last interview she will ever be asked to do.

“No more interviews? That would be great!” She enthuses.

Outside of the trailer, I return to the table where my cell phone was labeled, registered, and put into a bin. I begin to realize I have no idea who Britney is any more than I had yesterday. Her goodbye grin tells me she knows that I don’t know. Her smile is saying to me, “I am safe. The plan is working. I am happy.”