Big day for the #FREEBRITNEY campaign, people! Lou Taylor has resigned as Britney’s business manager! The resignation was on October 28th and Britney wasn’t informed about it. When the ship sinks, the rats flee lol

However, Jamie continues to act like an ass. According to new court docs, Ingham not only claims that neither Jamie nor Lou informed Britney of the resignation, but also that Jamie hired someone new without giving notice about it to Britney. And even worse, Britney doesn’t know the terms of their agreement so she doens’t know how much he’s being paid…WITH HER OWN MONEY! The court docs says:

“The October 28 letter states that TRISTAR SPORTS AND ENTERTAINMENT GROUP (“TRISTAR”) has resigned as BRITNEY’S business manager without prior notice to BRITNEY. Although no effective date is mentioned, the October 28 Letter does represent that “TriStar cannot wait to effectuate this change until the process of putting Bessemer in place as co-conservator is complete …. ”

“The October 28 letter further states that JAMES has retained MICHAEL KANE of MILLER KAPLAN to serve as business manager, effective Sunday, November 1, 2020. Mr. KANE was selected by JAMES without prior notice to BRITNEY. As result, there was no opportunity either for Mr. KANE to be interviewed or for alternatives to be considered. There is no indication as to any of the terms of his engagement by JAMES, including his compensation.” 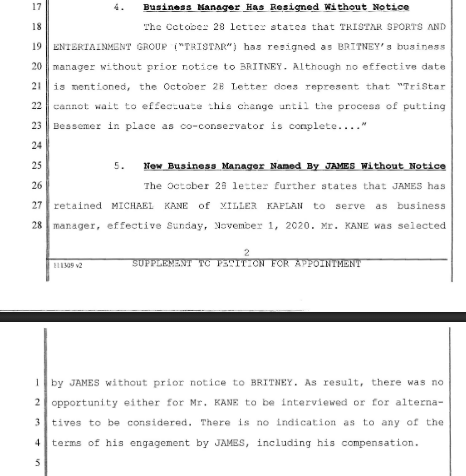 Too many things happening for a simple conspiracy theory, right? Lou Taylor, now it’s time to go to the light and see Jesus. We still hope that she is investigated for all the things she did.

Jamie Spears wants to hire more lawyers… And pay them with Britney’s money!