This started off what you could call Britney’s full-on comeback – after her brief one the previous year with the brilliant Blackout album. Womanizer saw her go all-out dance with production team The Outsyders. This was Britney back on form, spending seven weeks in the Top 10, eventually peaking at Number 3.

ChartFact: A performance on The X Factor helped the track reach its peak position, but who beat her to Number 1 that week? It was none other than X Factor star Leona Lewis with her cover of Snow Patrol’s Run.

Britney Fact: Brit’s X Factor association was in no way done – she ended up on the show herself, as a judge on the US version for one series. 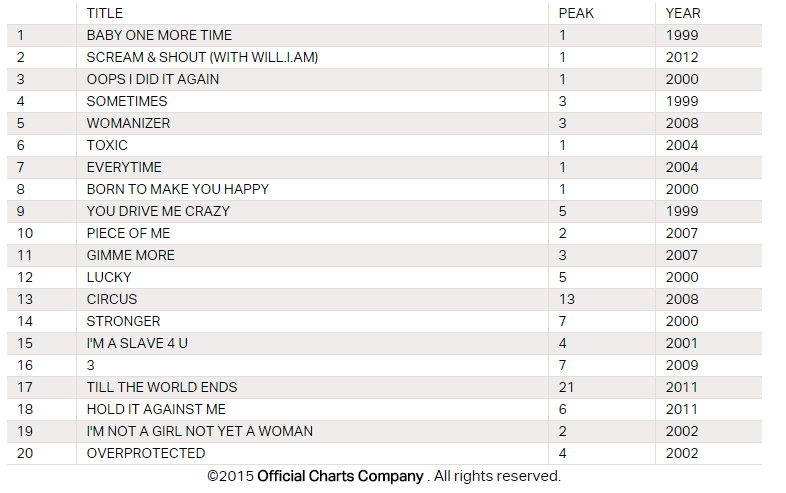 It’s a double-whammy for “Oh baby baby” fans – the parent album for her top selling single also takes pole position in the Official Albums Chart record books. It spent seven weeks in the Top 10, but never reached the summit.

It took 47 weeks before the album peaked at Number 2, and the album spent 66 consecutive weeks in the Top 40.

ChartFact: …Baby One More Time was the first of four Britney albums to peak at Number 2 – she has, amazingly, never had a Number 1 album in the UK.

What do you do when you’re a tabloid favourite and causing controversy with surprise marriages and motherhood? Well, you chuck out a greatest hits, of course!

Britney was everywhere when she released her first hits retrospective in 2004, led by a cover of Bobby Brown’s 1988 hit My Prerogative. She actually out-peaked him – Bobby reached Number 6 while Britney went Top 3! She’s the queen of sales shade!

ChartFact: Britney’s Greatest Hits was kept from the Number 1 spot by another new entry on 14 November 2004 – Eminem, with Encore. Even though Britney sold 115,000 copies in that first week, Eminem outpaced her by 7,000 sales.

Britney’s sophomore effort didn’t fall foul of the “difficult second album” curse at all. It spent 35 consecutive weeks on the Top 40, peaking at Number 2 (again!). And if you’re going to be beaten to Number 1 by anyone, it might as well be Whitney Houston. Yes, the late great legend won the Whitney-Britney standoff with her greatest hits collection.

ChartFact: Whitney beat Britney to Number 1 by a mere 1,200 copies… So close, Brit!

Despite being Britney’s first album to miss the Top 10 altogether, In The Zone comes in fourth. Spawning two massive Number 1 singles Toxic and Everytime, Britney’s transition from teen pop sensation to polished pop performer was complete.

On the week of release in November 2003, competition was fierce, with new entries from Michael Jackson, Busted, Kylie Minogue and the Beatles meaning there was no room in the Top 10 for Britney. She entered at Number 14.

Maybe if the set had been released after she went to Number 1 with Toxic, things could have been different…

Britney’s third album saw her experiment with her sound and take a noticeably more R&B direction on lead single I’m A Slave 4 U, working with Pharrell Williams. It was the first time a Britney long-player didn’t yield any Number 1 singles, but you can’t argue with four Top 10s.

ChartFact: Boys, the fourth official single from Britney, was the first time the star shared artist credits on a song. The special guest on this single remix was none other than Pharrell Williams. Her next Top 10 over a year later would also have a featured artist. It was, of course, Madonna on Me Against The Music.