Welcome to Britney Spears Fan your best online source on everything about Britney Spears. Here you'll find her latest news, photos, videos and many more on her carrer. We have a photo gallery with more than 250,000 photos and growing! We hope you enjoy our site and if you have any question please feel free to contact us. Thank you!
Published on In
Interviews 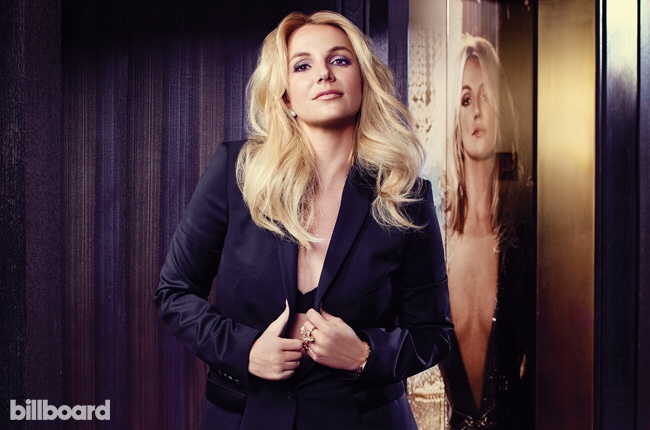 As we told you before, Britney is on the cover of Billboard magazine and here’s a sneak peek of the interview where she talks about her life in Las Vegas, her boyfriend, her children and much more.

What’s Britney Spears been up to in Vegas? The latest issue of Billboard, out Friday, March 13, has an exclusive glimpse into the pop diva’s new lifestyle since kicking off her first residency at Planet Hollywood Las Vegas in late December 2013. “To have your children and your family and that way of life, it just makes sense to have everything in one place,” she tells Billboard for the first Sin City-themed issue (and, notably, Britney’s Billboard cover debut.)

It’s been 15 months since Spears, 33, first embarked on her Vegas takeover with Piece Of Me, and she seems to be loving her new surroundings (and new boyfriend.) Here are five things the singer told us about her home away from home.

1. Her new boyfriend, Charlie Ebersol, is a frequent visitor.
“Oh, he loves it. He comes every weekend, even though he’s flying all over the place,” says Spears. “It’s always really nice when he comes. The kids love to see him. It’s great.” What do she and Ebersol, 32, have most in common? “I feel like our passion for life is pretty much on the same page.”

2. So are her sons, Jayden James and Sean Preston.
Spears keeps a residential suite three nights a week during show weeks just a few blocks away from Planet Hollywood, where her kids visit every other weekend. “It’s really big, kind of like a big condo. It’s four bedrooms. We have a yard, it’s really nice,” she says.

3. Where does Britney go offstage? Think sushi and Sonic — not the slots.
Not one to hit the tables (“I’m not a gambler at all, that’s not something that I’m into at all”), Spears instead gets amped when talking about her favorite places to eat. “Oh my God, I love Sushi Samba, I love Koi. Those are my two favorite sushi places. I could literally go there every day of my life.” And then there’s her guilty pleasure, Sonic, which has a Strip-adjacent location right off Flamingo Boulevard. “They have Southern sweet tea and everything from Louisiana, so that’s really nice.” Spears pauses to consider her dining habits. “Actually, I need to start eating at more places this year. I stick to my two restaurants and I need to branch out a little bit.”

4. A slumber party at Celine Dion’s house inspired her to come to Vegas.
Shortly after wrapping her Dream Within A Dream Tour in 2003, Spears flew out to Vegas to check out Celine Dion’s A New Day… residency. “I remember coming here, and I stayed with a friend at her house, and I remember how beautiful it was,” Spears recalls. “Just the set-up and everything was just really cool, low-key, and her dressing room was great. I was actually jealous, like, “Oh my gosh, she gets to be in one place all the time.’ And I just thought, ever since then, that everything really clicked.”

5. “Toxic” is her favorite song to sing during Piece of Me.
“I get rained on and it wakes me up,” Spears says with a giggle, noting that 90-minute sets three nights a week can be grueling. “And I’m able to really give more because I’ve just had this shower onstage. It’s actually really fun, I jump off of a tree and it’s kind of exciting.”

Britney on The Jonathan Ross Show: Full interview
99.7 [NOW!] Interview at the 2016 Triple Ho Show
New interview with PEOPLE Magazine: Britney talks about her kids, her new perfume and more