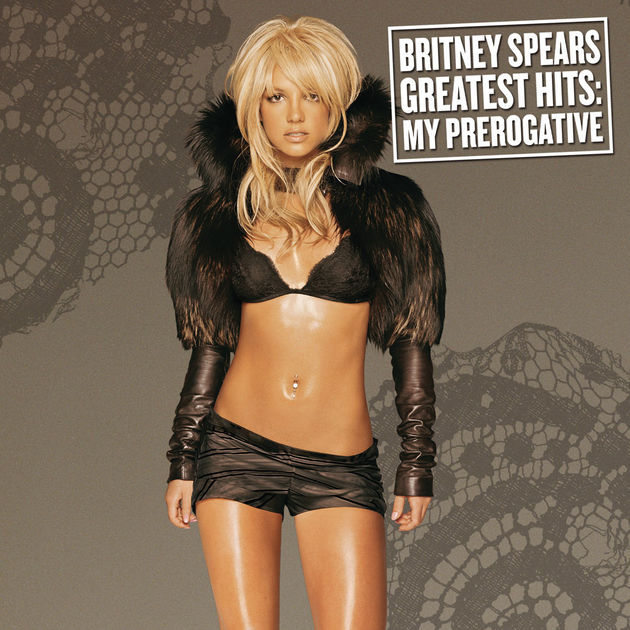 Greatest Hits: My Prerogative is the first greatest hits album by Britney Spears. It was released on November 3, 2004 through Jive Records and Zomba Recording. The album was released in two different editions, standard and limited, with the latter containing a bonus disc with remixes. A video compilation of the same title, featuring twenty of Spears’ music videos, was released to accompany the songs. The album includes three new tracks: a cover of Bobby Brown’s “My Prerogative”, “Do Somethin'” and “(I’ve Just Begun) Having My Fun”, which was previously included on the international editions of Spears’ fifth video album Britney Spears: In the Zone (2004).

It was certified platinum by the Recording Industry Association of America(RIAA) and has sold over five million copies worldwide, selling over one and a half million copies in the United States.

The album cover photo is an outtake for the Rolling Stone magazine shoot by Matthew Rolston in 2003.  Click here to see the pictures.

Stream It on Spotify

On August 13, 2004, Spears announced through Jive Records the release of her first greatest hits compilation titled Greatest Hits: My Prerogative, due on November 16, 2004; it was, however, released a week earlier in the United States. The title was chosen after the album’s lead single, Spears’s cover version of Bobby Brown’s song “My Prerogative” (1988). The cover was produced by Swedish production team Bloodshy & Avant. A video compilation of the same title was also released the same day, containing Spears’ music videos. Spears had recorded a song titled “(I’ve Just Begun) Having My Fun” originally for her fourth studio album In the Zone (2003). It was first included as a bonus track on the European edition of the video album In the Zone. In the United States, the track was a free download on the Walmart edition of In the Zone, due to an exclusive deal with Walmart and Sony Connect. When the deal ended in mid-2004, Jive Records decided to release it on iTunes Store on August 17, 2004. “I’ve Just Begun (Having My Fun)” peaked at number seven on the iTunes chart while it was speculated to be in the track listing of Greatest Hits: My Prerogative. The track listing was officially revealed on September 13, 2004. Greatest Hits: My Prerogative included three new tracks: “My Prerogative”, “I’ve Just Begun (Having My Fun)” and “Do Somethin'”, all of them produced by Bloodshy & Avant. A limited edition of the album was also released, which included a bonus disc with remixes of Spears’ songs by different recording artists, as well as a megamix of Spears’ hits.

In the United States, Greatest Hits: My Prerogative debuted at number four on the Billboard 200, with sales exceeding 255,000 copies. It has spent a total of thirty-two weeks overall on the chart. The album also became her first album not to debut at number one. In December 2004, the album was certified platinum by the RIAA for shipments of a million copies. As of March 2015, Greatest Hits: My Prerogative has sold over one and a half million copies in the United States. The album debuted at number three on the Canadian Albums Chart, selling 20,400 copies and was certified gold by the Canadian Recording Industry Association (CRIA) for shipments of 50,000 units. In Australia and New Zealand, Greatest Hits: My Prerogative debuted at number four and seventeen on the official charts, respectively. The album was certified double platinum by the Australian Recording Industry Association (ARIA), indicating shipments of 140,000 units.

In the United Kingdom, Greatest Hits: My Prerogative debuted at number two on the UK Albums Chart, behind Eminem’s Encore, with first-week sales of 115,341 units. The album debuted at number three on the European Top 100 Albums. Greatest Hits: My Prerogative also debuted at number two in Belgium (Wallonia), Finland and Denmark, number four in Austria and Norway, and inside the top ten in Belgium (Flanders), Czech Republic, Italy, Portugal and the Netherlands, also charting in Sweden and Spain. In Japan, the album became her first album to top the Oricon Albums Chart, selling 173,145 copies, and finished as the thirty-eighth best-selling album of 2004 and the fortieth of 2005. To date, it has sold 710,124 copies in the country and remains her highest-selling album there. Global sales for Greatest Hits: My Prerogative stand at over five million units.

“My Prerogative” was released as the first single from the compilation. The song was set to premiere on radio stations on September 14, 2004, however, it leaked in the Real Tapemasters Inc.’s mixtape The Future of R&B on September 10, 2004. The cover was musically different from Bobby Brown’s original song, and was noted for aptly referring to Spears’s relationship with the media at the time. It received mixed to negative reviews from critics, but went on to achieve worldwide success, topping the charts in Finland, Ireland, Italy and Norway, and reaching the top ten in another fourteen countries. In the United States, “My Prerogative” charted on Mainstream Top 40 at number twenty-two and topped the Bubbling Under Hot 100 Singles, failing to enter Billboard Hot 100.

Although no more singles were planned, Spears wanted to shoot a music video for “Do Somethin'” and pushed for it to be released. The song was released as a single outside North America on February 14, 2005. “Do Somethin'” received positive reviews, and reached top ten positions in Australia, Denmark, Greece, Hungary, Ireland, Sweden and the United Kingdom. Although the song wasn’t released in the United States, it charted on Billboard’s component charts due to digital downloads and reached number hundred on the Billboard Hot 100. The accompanying music video was co-directed by Billie Woodruff and Spears, who was credited as her alter ego “Mona Lisa”. She was also the stylist and choreographer of the video.