Category: Britney: Piece Of Me

Published on In
Britney: Piece Of Me Interviews Music News

Well, this is EXCITING! In a new interview with Las Vegas Sun Larry Rudolph said that Britney’s new album is 80% done and this album is her favorite album that she has ever done.

He also confirms that Britney is meeting with The Weeknd to work on the album and that she has done “a lot of writing on the album”. According to him people will absolutely love it and she sounds amazing on it. The new album is not titled yet because it isn’t finished.

And talking about taking the Piece Of Me show overseas, he said that now there isn’t territorial restrictions on Brit’s contract with PH and that Britney will like to do festivals to promote the album and the residency, like the Rock In Rio. They MIGHT consider doing some international performances (He mentions Asia and Europe) but nothing is concrete at all.

Comments are off
Published on In
Britney: Piece Of Me Videos

Britney: Piece Of Me February 13th show – Photos and videos

Britney just SLAYED her comeback “Britney: Piece of me” show in Las Vegas. She changed all the show costumes and changed the choreographies from, let’s say, 60% of the songs. The new songs added were I Love Rock N’ Roll, If You Seek Amy, Breathe On Me and Touch Of My Hand. And she also performed a Missy Elliott break.

To sum up, the pictures and videos tha we saw are AMAZING.

The guitar from the Femme Fatale Tour is back for I Love Rock N’ Roll.

But now… Enjoy some photos from the show. Britney’s on point!!!  MORE PICTURES HERE 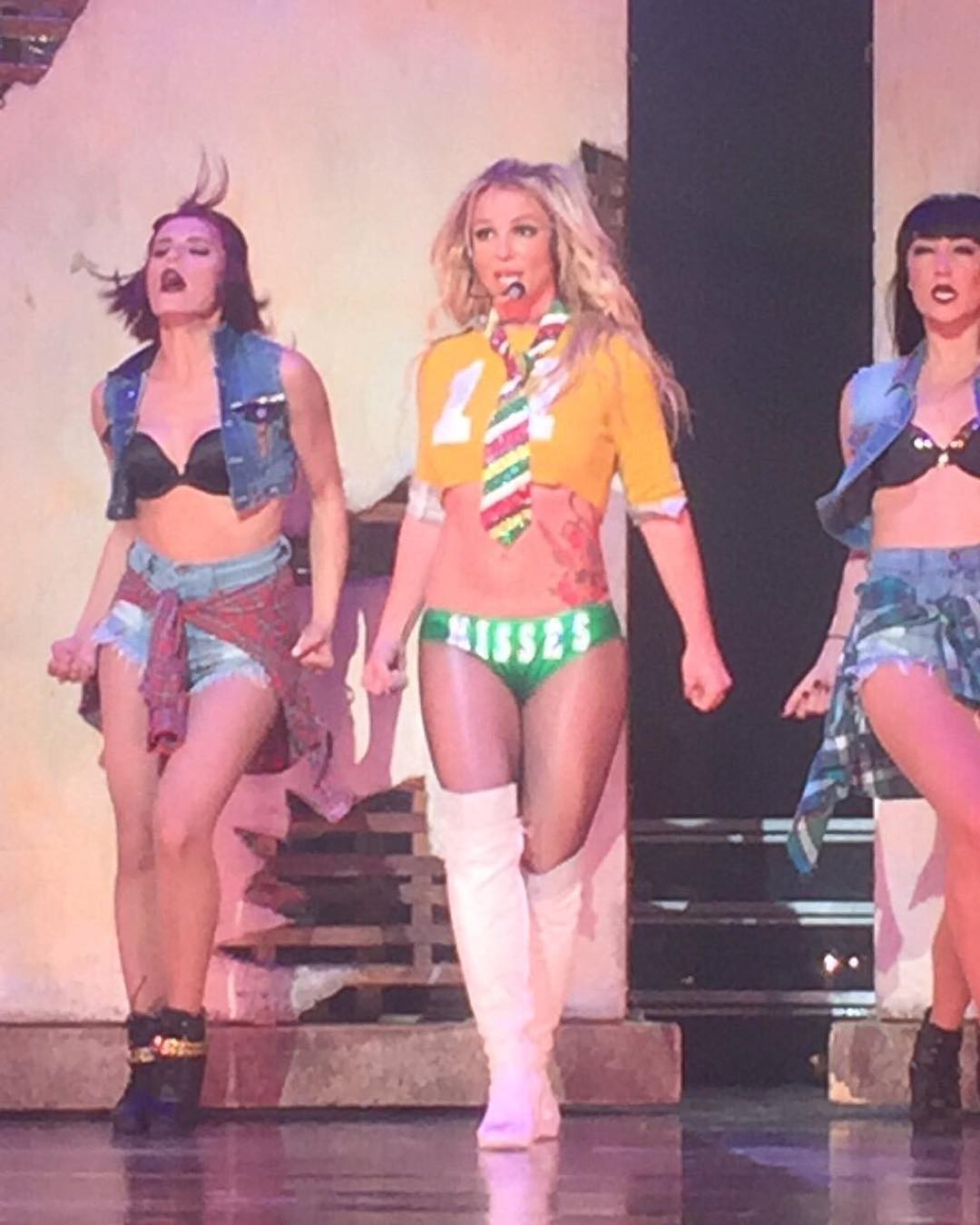 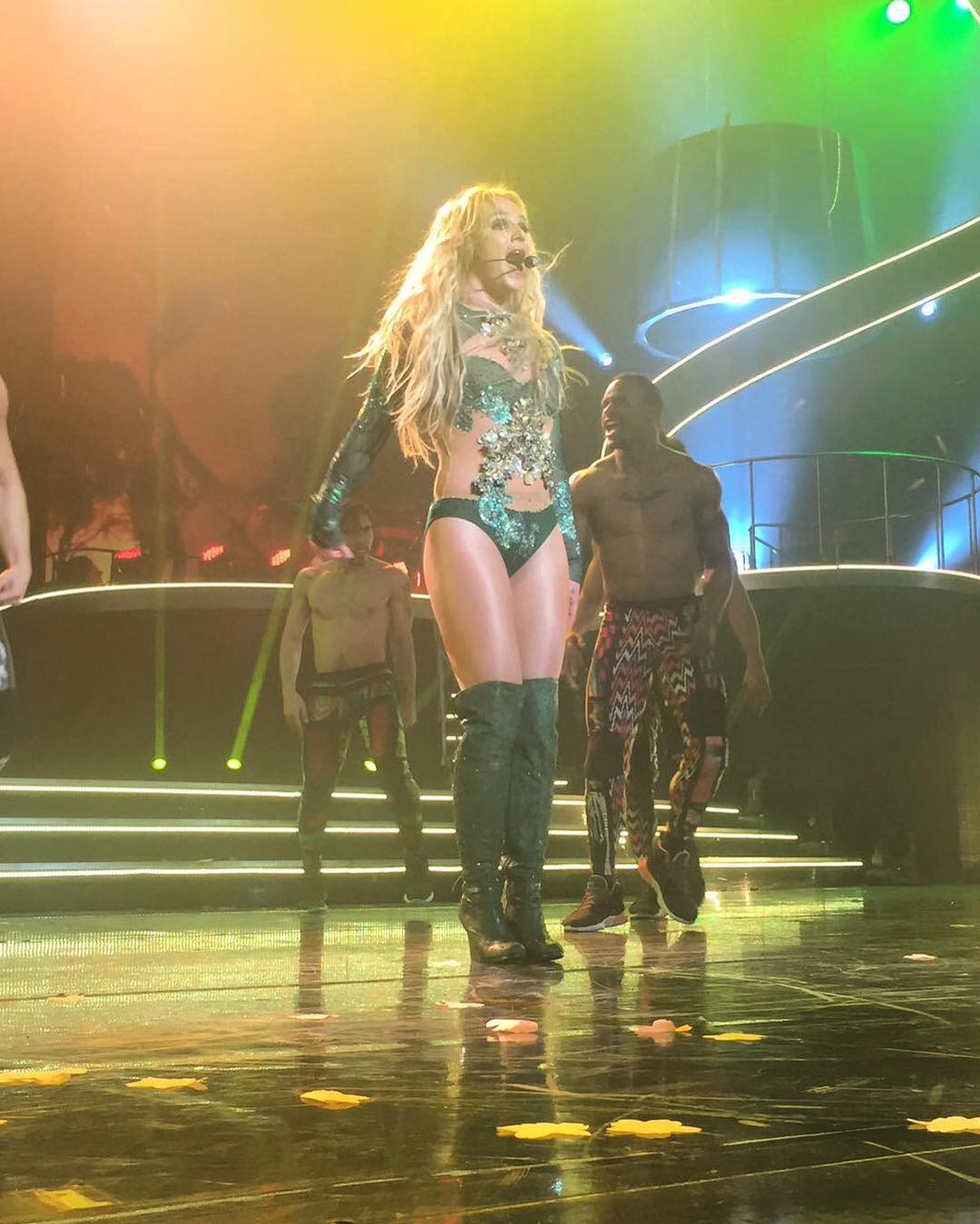 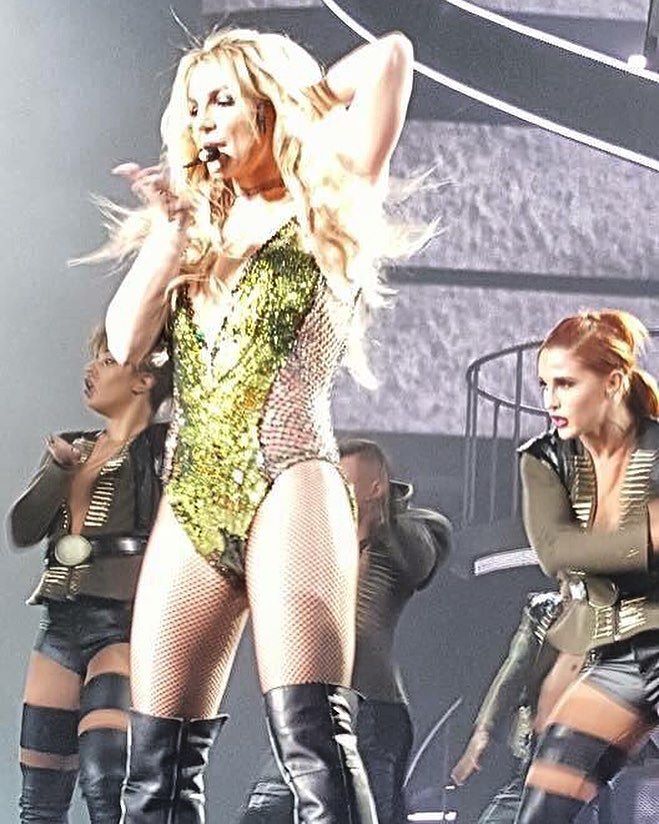 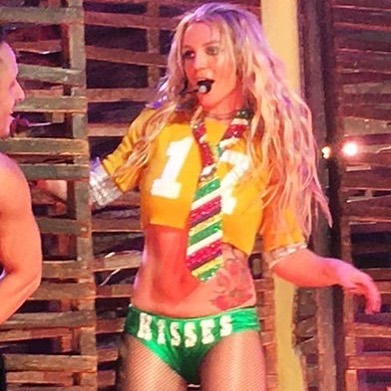 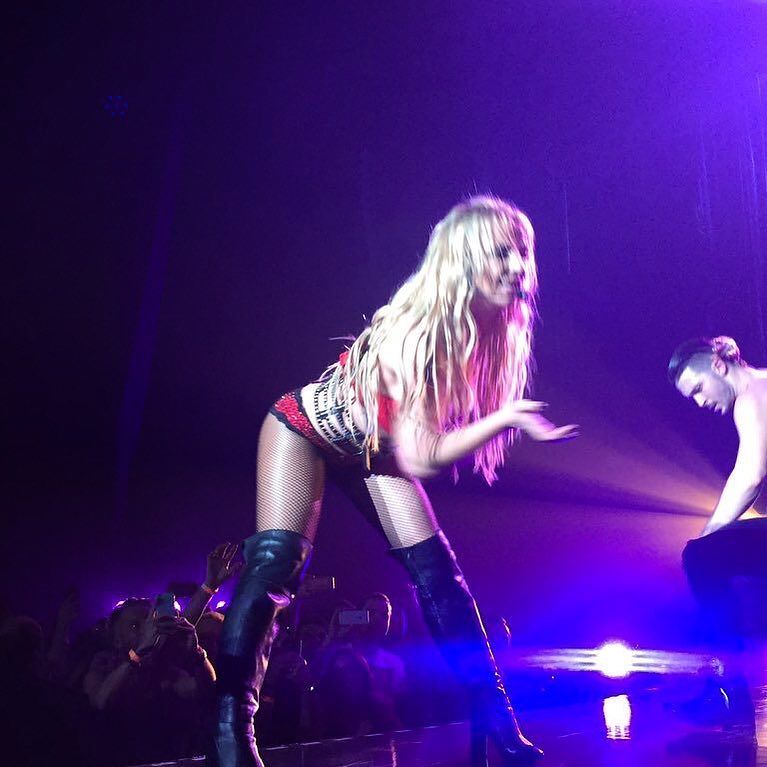 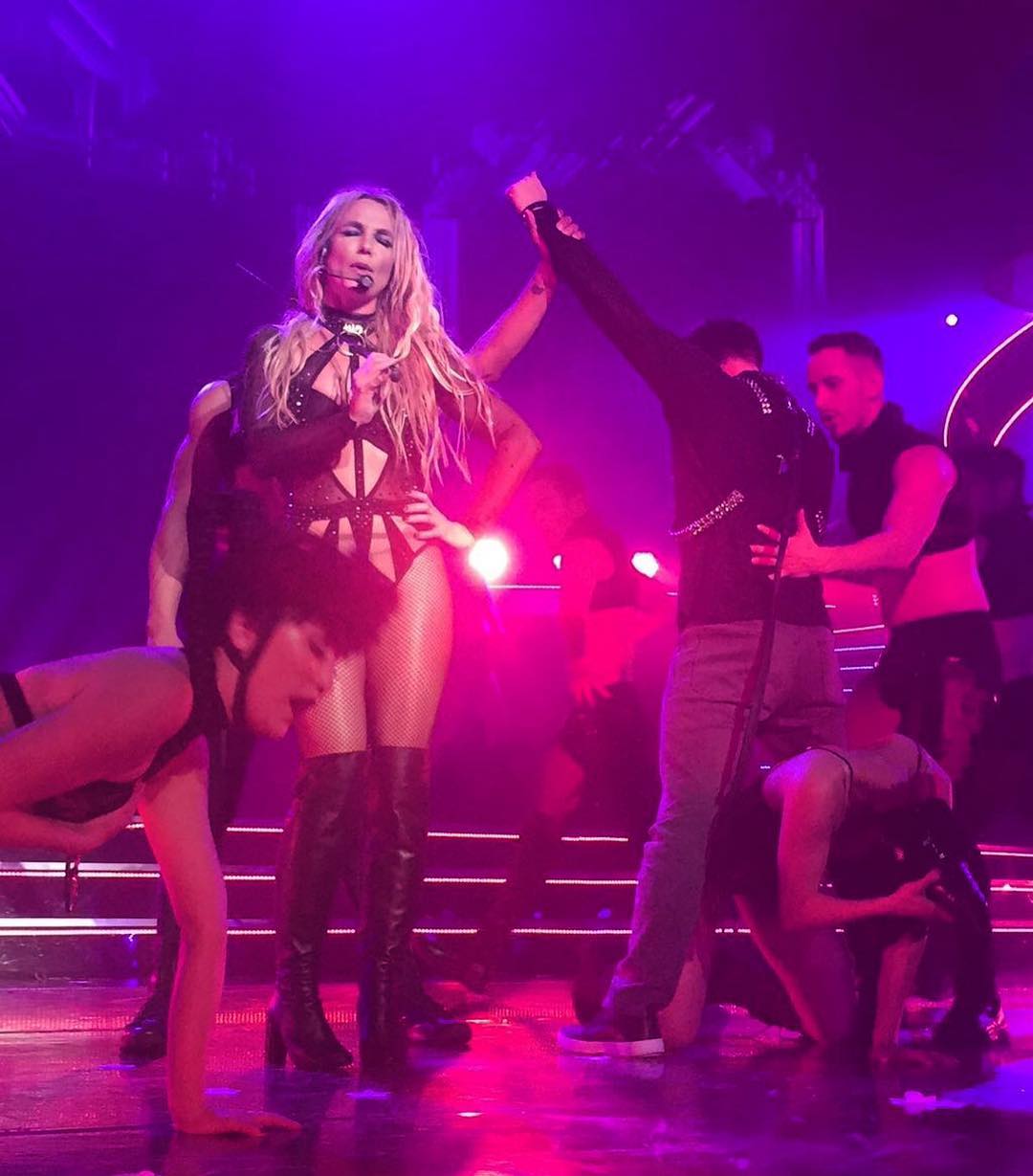 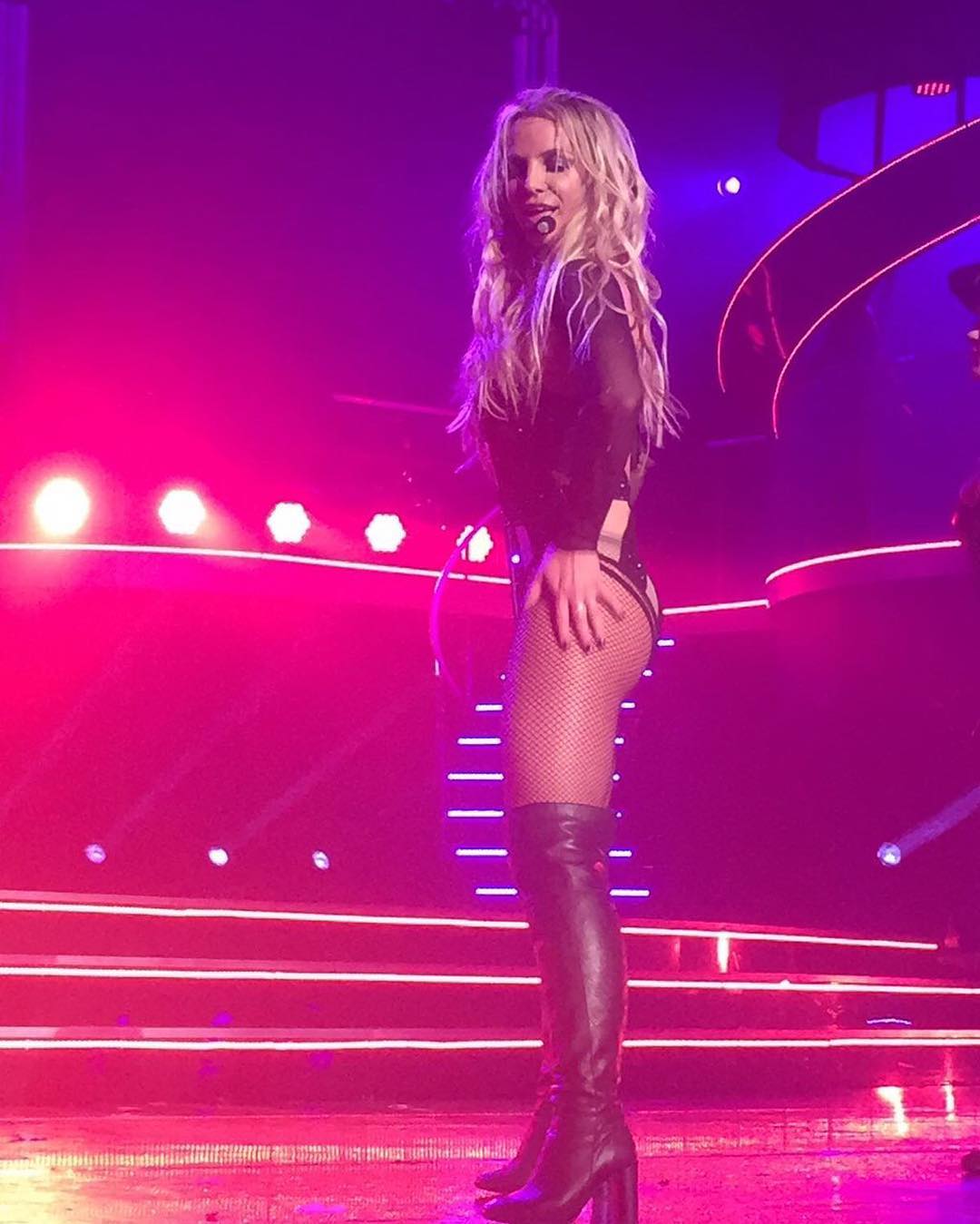 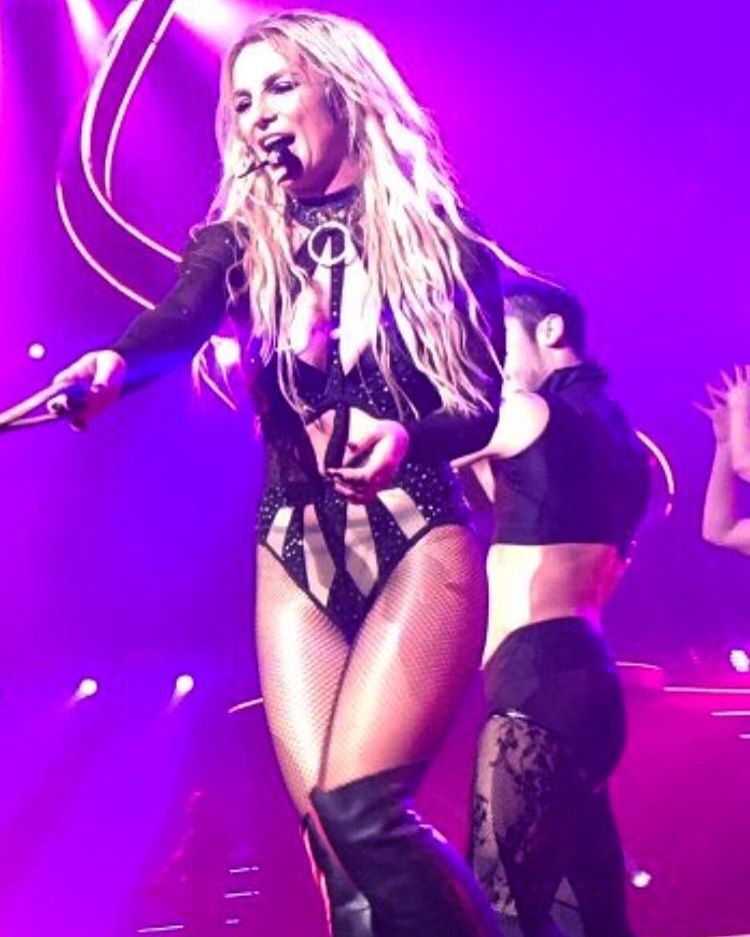 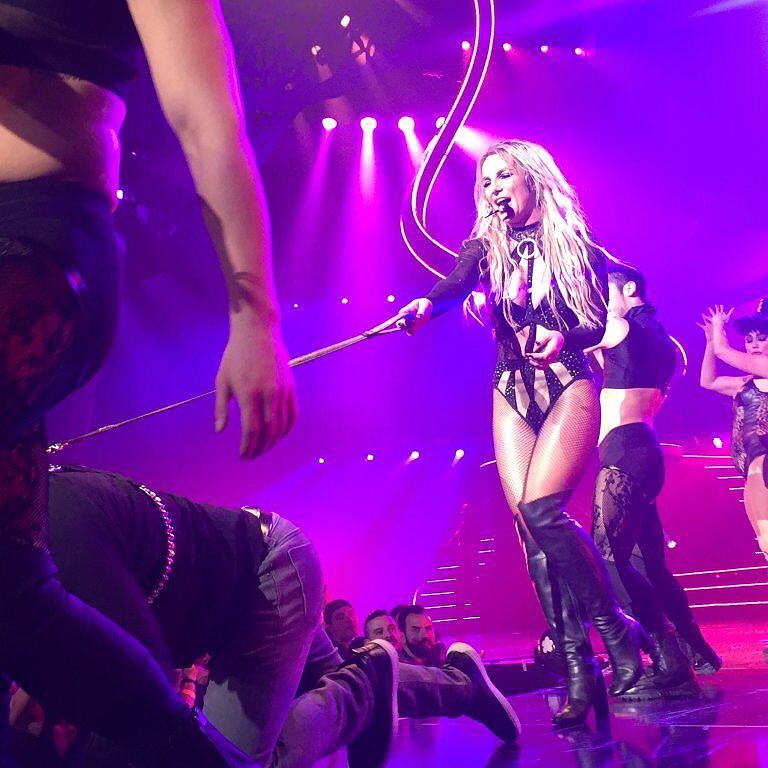 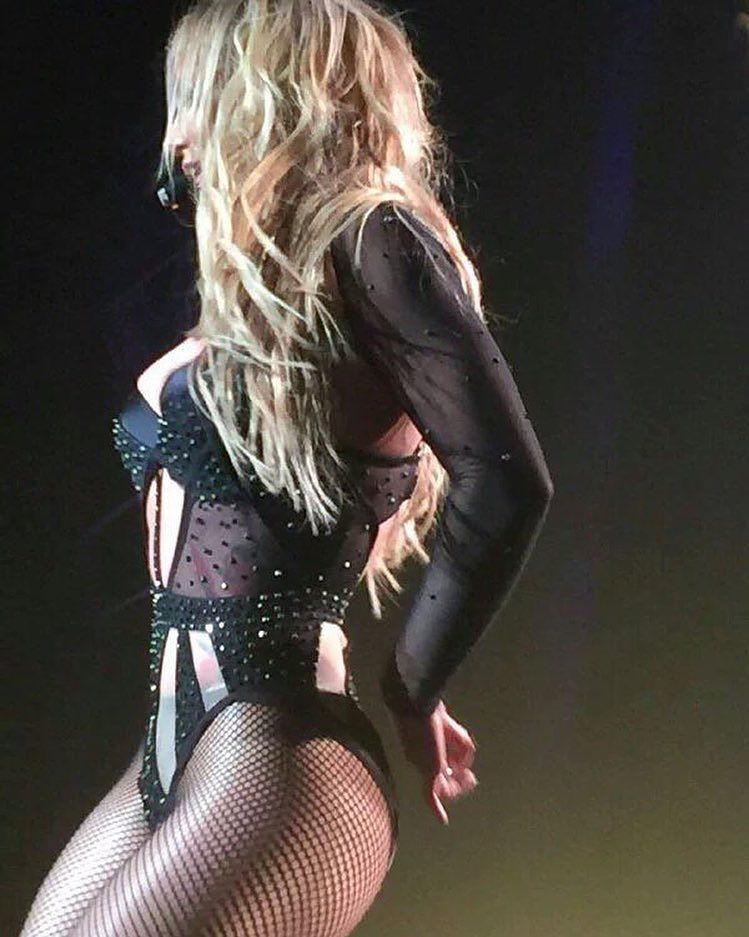 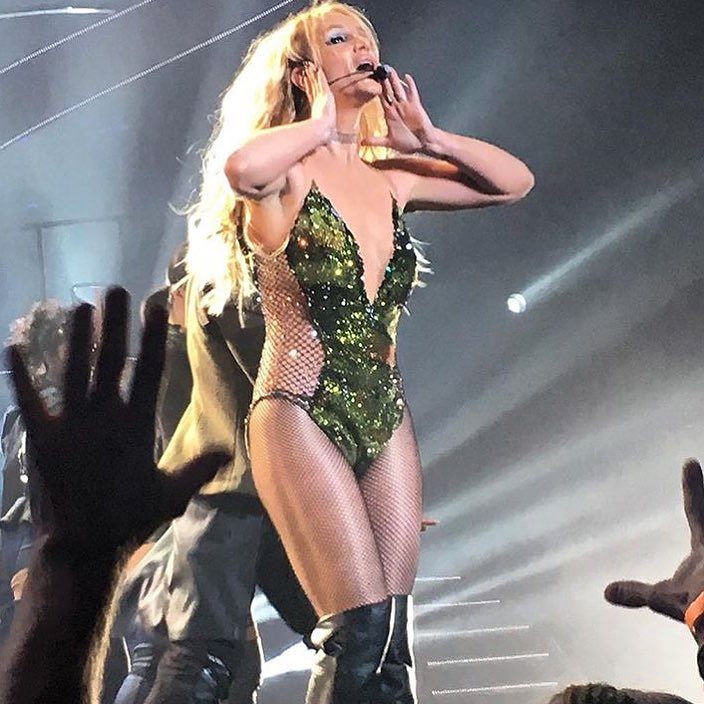 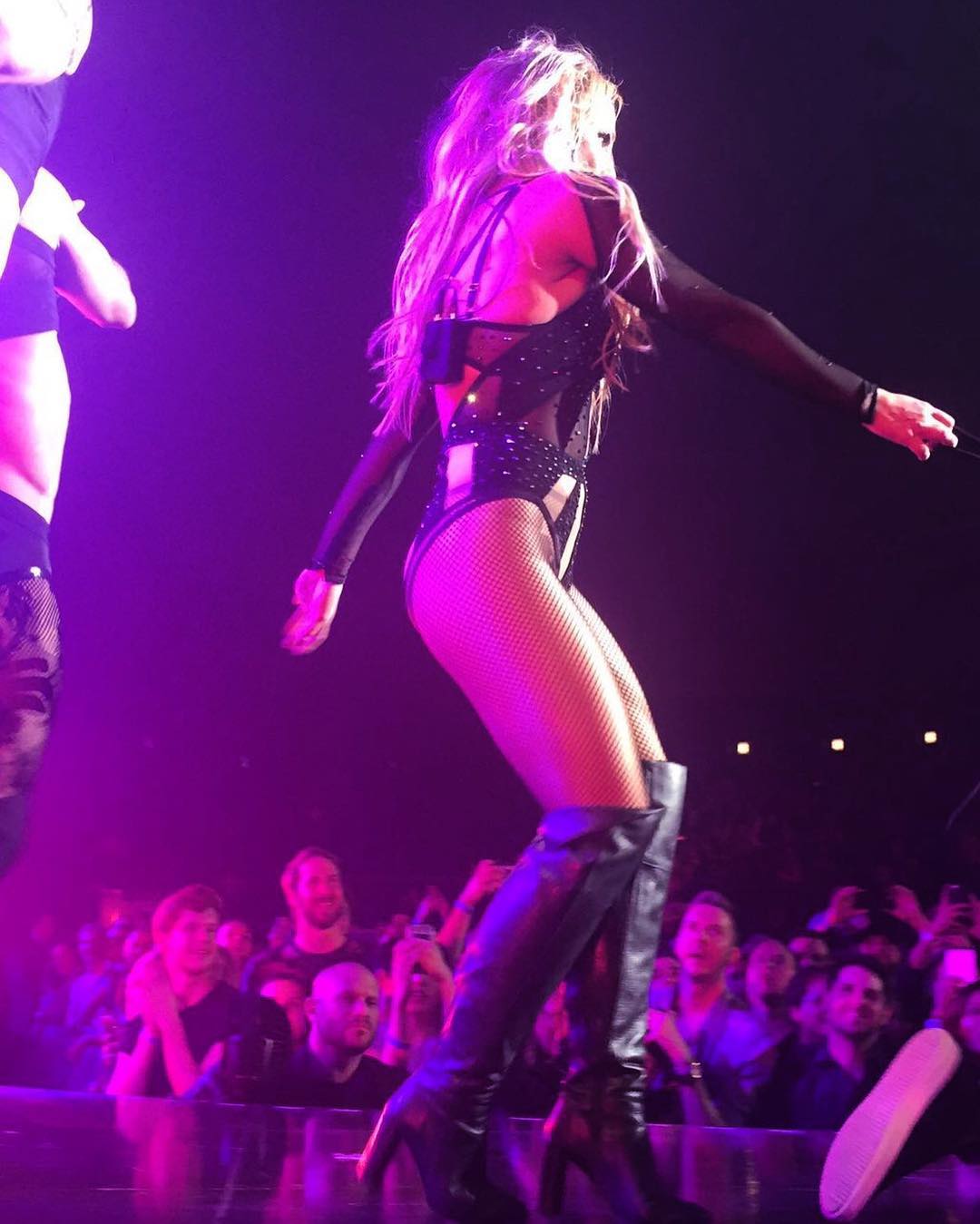 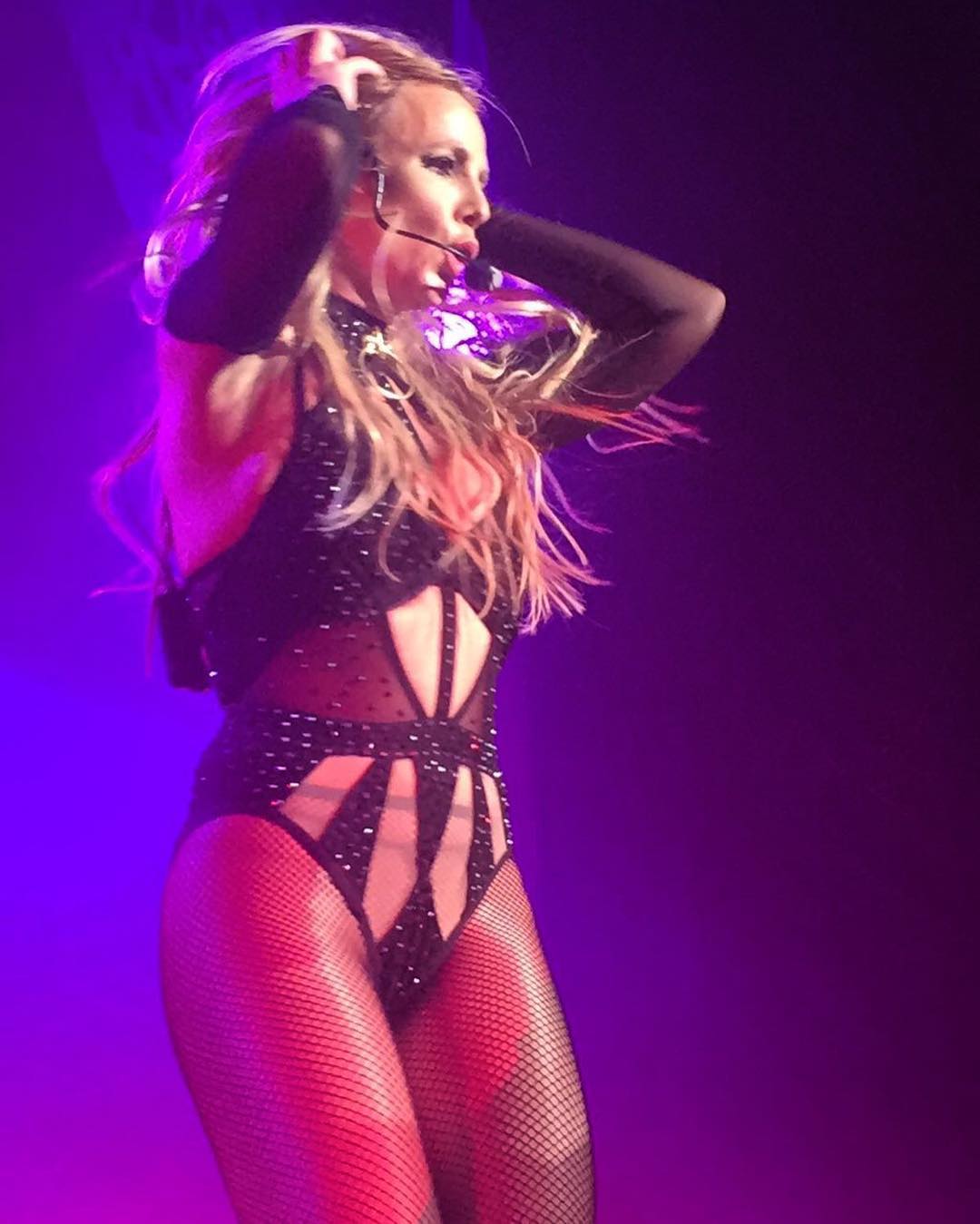 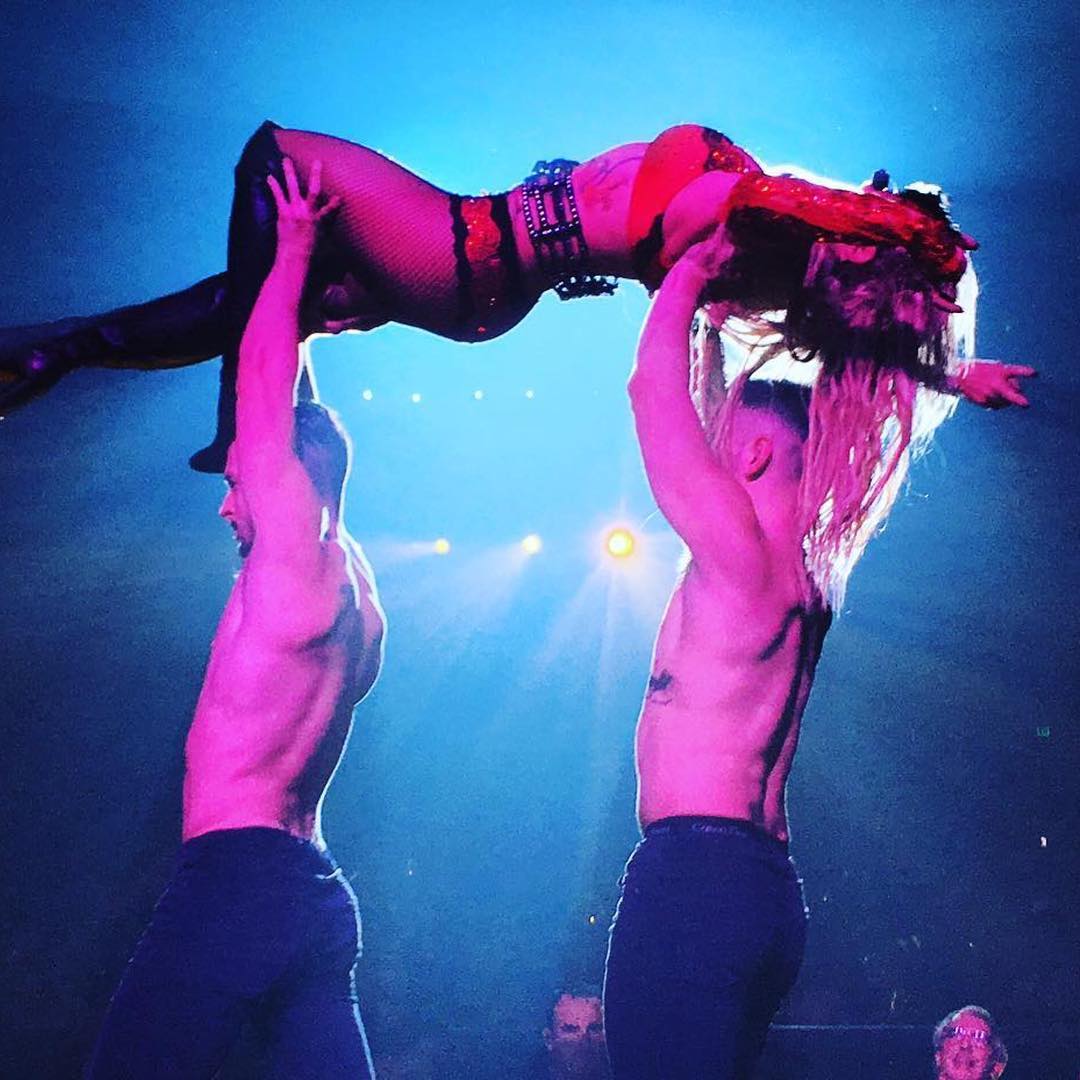 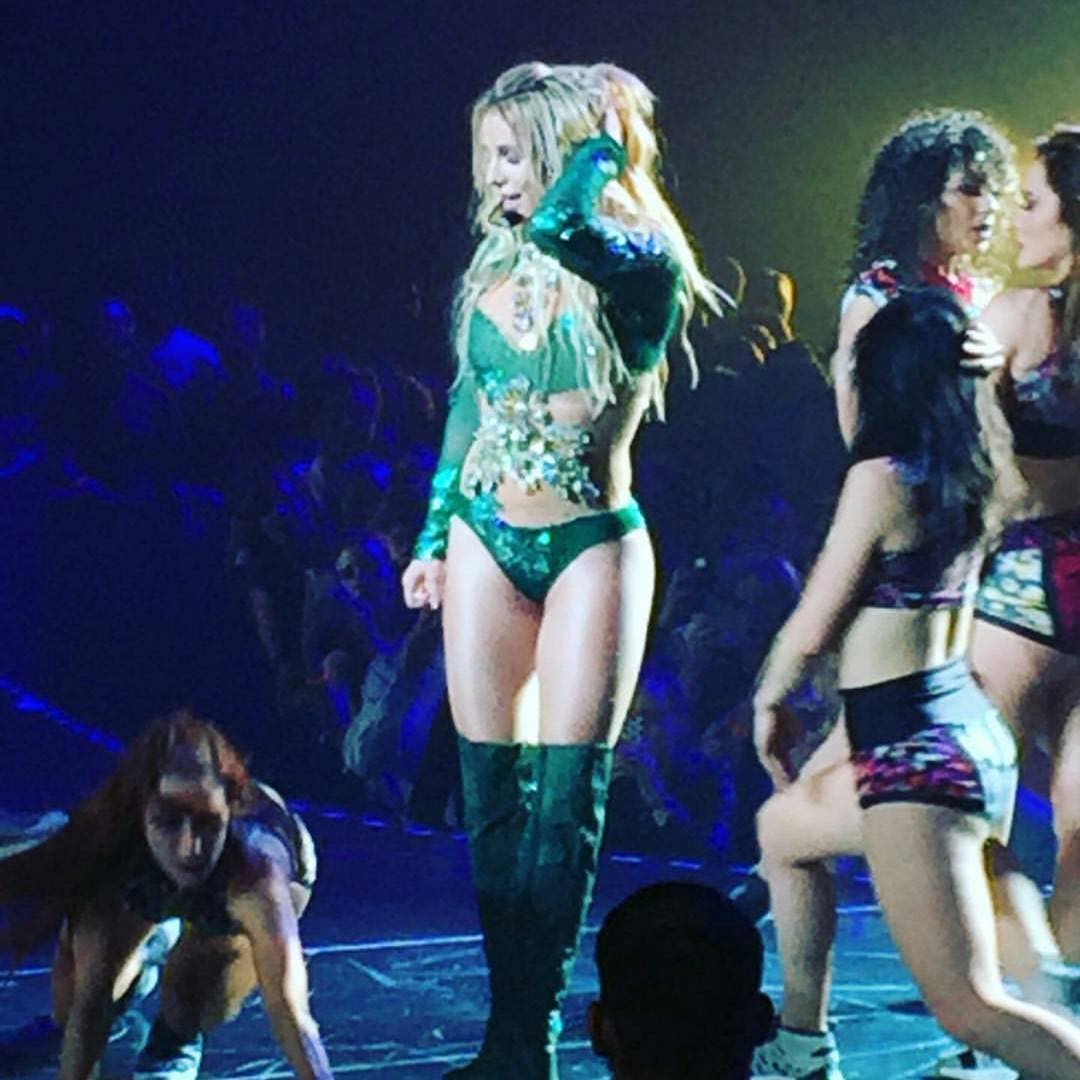 Comments are off
Published on In
Britney: Piece Of Me Interviews Music News

Robin Leach’s new interview with Britney is finally here! She talks about new Piece of Me changes, she confirms that new music is coming very soon and mentions how she misses touring and gives some hope to the fans who can’t travel to Las Vegas to see the show.

Robin also confirmed that two of her songs added to the new show are “Breathe on Me,” which leads into “Touch of My Hand.

Read out the interview below:

There’s no question that pop princess Britney Spears changed the pop-music dynamic on the Strip with her “Britney: Piece of Me” resident show at Axis at Planet Hollywood.

It’s been a blockbuster success since its Dec. 27, 2013, premiere. Fans have flocked to the show, and before its second anniversary, Britney extended her contract two years through 2017.

Her residency single-handedly triggered additional pop shows, with Jennifer Lopez and the upcoming Lionel Richie at Axis, along with Mariah Carey at Caesars Palace and Rascal Flatts at the Hard Rock hotel.

Many more are to come, I’m told!

Fans, other superstars, Caesars Entertainment execs and critics have raved about Britney’s spectacular with its staging, artistic effects and her adventurous onstage stunts of flying like an angel and swinging out over the audience from a jungle tree, plus the razzle-dazzle dance routines.

My review was posted Dec. 28, 2013. Britney has made herself a valuable member of our community and in October donated $120,000 to Nevada Childhood Cancer Foundation in her partnership with the organization.

We’ll be back Monday with a report on the new look that Britney has given “Britney: Piece of Me” that she began working on in December. Meantime, she answered questions via email for Vegas DeLuxe:

Are you excited for the new look to “Piece of Me”? Tell me what we should expect.

Definitely excited! I’ve added a few fan-favorite songs into the show, changed up the intro and had fabulous new costumes designed for each act. I also put together an amazing dance break to three of my favorite Missy Elliot songs. And we have lasers now. I love the look of the lasers.

Why did you want to change it up, and what’s it like working with Baz Halpin?

I’m constantly getting hit up by fans asking me to add this song or that song, and I thought it would be a great idea after two years to give everyone a little something different. I love working with Baz Halpin — he really listens to me and understands how to make my vision come to life.

How long did it take to give it the new look from thoughts on paper to working out the routines and onto rehearsals?

The intention wasn’t to completely revamp the show — there are so many parts of the original show that I love and didn’t want to change — but it’s still a long process, maybe three months or so.

Starting with concepts and ideas to creative meetings about the setlist and new visuals, getting new mixes of music, creating choreography, then going into weeks of dance rehearsals and finally putting all of the production together. It’s a lot of moving parts. It makes me tired just thinking about it all! LOL.
END_OF_DOCUMENT_TOKEN_TO_BE_REPLACED

Piece Of Me is coming back in 10 days and Planet Hollywood keep promoting the “remixed and reimagined” show. Now they have changed the elevatos photos with NEW Britney’s photos (We had never seen the last one)!! AND WE LOVE THEM. Check them out below. 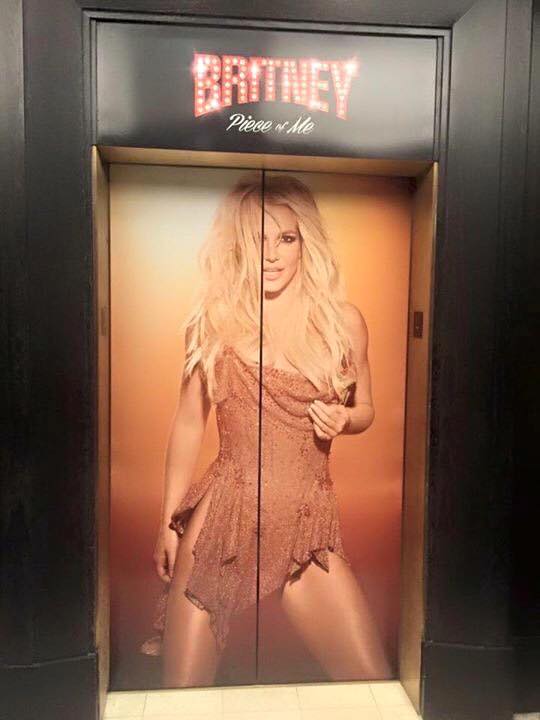 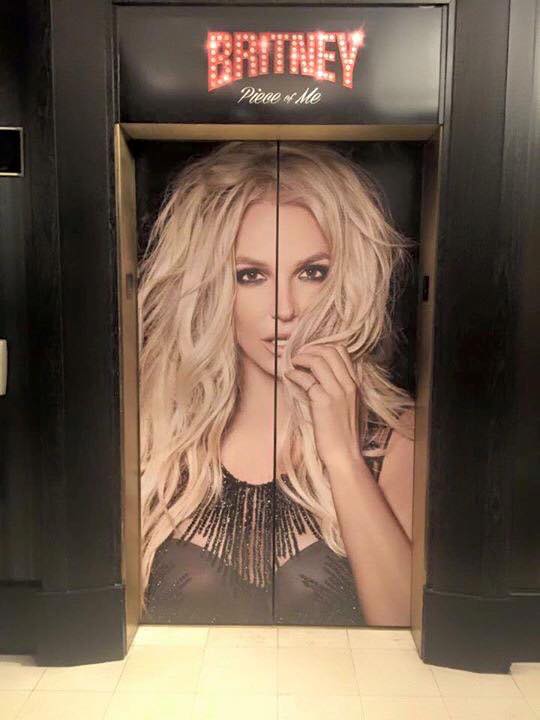 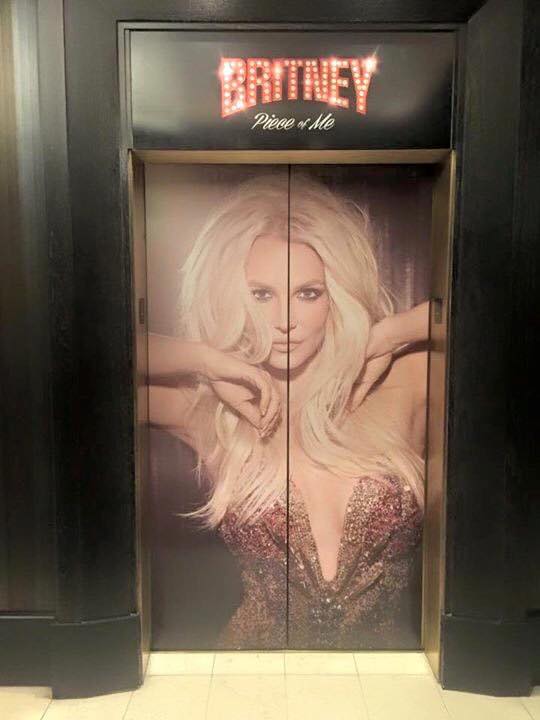 This photo is gorgeous! Britney just changed her profile picture on facebook with this beautiful new outtake. We can’t wait to see more!

Get tickets to “Piece Of Me” here:britney.lk/pomtickets 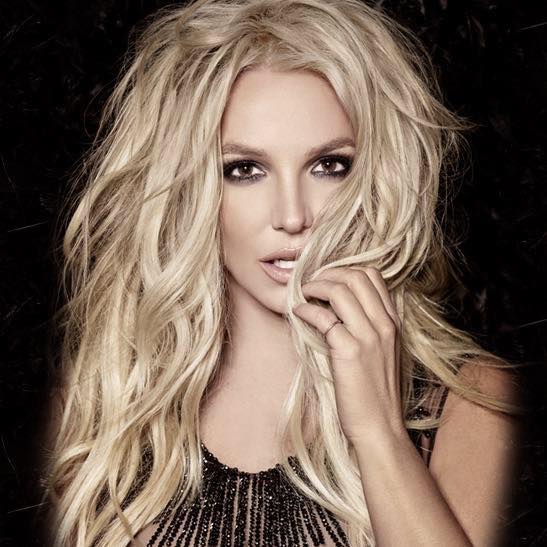 Edit: Here’s another promo. This shoot is absolutely beautiful. 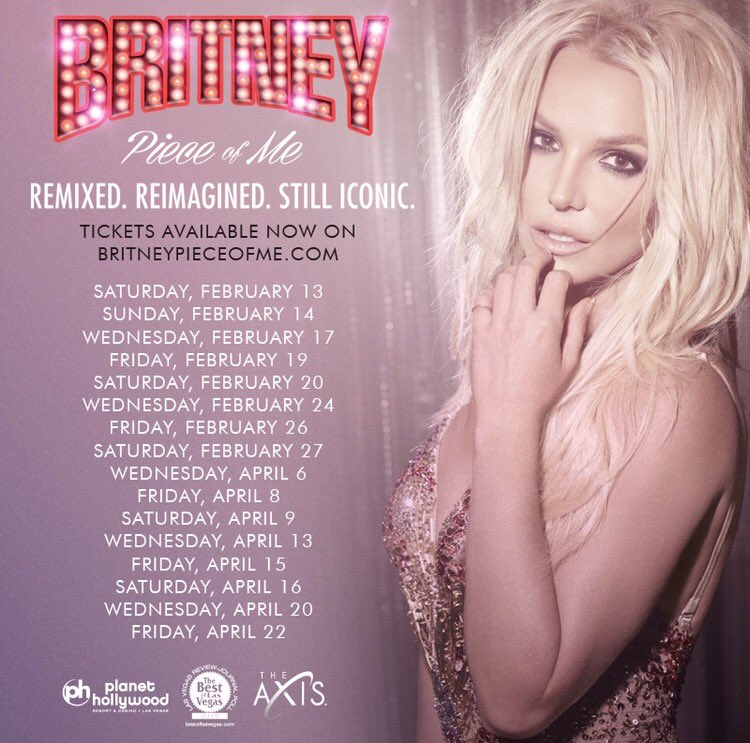 Comments are off
Published on In
Britney: Piece Of Me News

Britney Spears returns for revamped ‘Britney: Piece of Me’ at Axis

Via Las Vegas Sun — Pop princess Britney Spears moves her cast and crew back to Las Vegas on Thursday to start onstage rehearsals of her new-look “Britney: Piece of Me” at Axis at Planet Hollywood.

Since Jennifer Lopez has her stage all set at Planet Hollywood for her new resident show “All I Have,” Britney will be working out of another hotel property being kept secret.

I’m reliably told that about 75 percent of the hit show will be with new music, songs, dance routines and costumes being added as of Valentine’s Day Weekend when she’s back onstage on the Strip.

It also is going to be a new-look Britney, who has trimmed her body into amazing shape while on a break from the Strip back home in Los Angeles. The 34-year-old superstar flaunted her new, sexy and defined look of toned legs, sculpted arms and whittled waistline on Instagram videos Tuesday.

The new costumes Britney has ordered for her resumed residency will allow for maximum exposure to show off her assets. In addition to her tough show and dance rehearsal schedule in L.A. and here, the workout fanatic credits rigorous cardio training, yoga, boxing and treadmill runs for her keep-fit regimen.

Along with three hourlong sessions with a personal fitness trainer each week, Britney also has been doing 90 minutes of yoga twice weekly. She sticks to sushi, vegetables and fruits for her diet.

“She’s in the greatest shape and happiest state of her life,” I was told by one of her closest pals Tuesday. “She can’t wait to unveil her new look and the show’s new look. Both will be sensational, causing fireworks on the Strip.

“Britney is really loving the new show and believes it’s her best yet!” Her new run of “Britney: Piece of Me” is select dates from Feb. 13-27 and April 6-22.

Comments are off
Published on In
Britney: Piece Of Me News Videos

Piece of Me rehearsals videos + info

On January 20 Britney shared on Instagram two videos during the rehearsals for the new Piece Of Me Show, more specifically, rehearsing Breathe On Me!!! We can’t wait to Feb 13 to see all the changes!

Britney, and the entire team, is now rehearsing the new show at a secret location in Las Vegas.

Check out this new banner of Britney in Los Angeles to promote Piece Of Me show. Amazing! 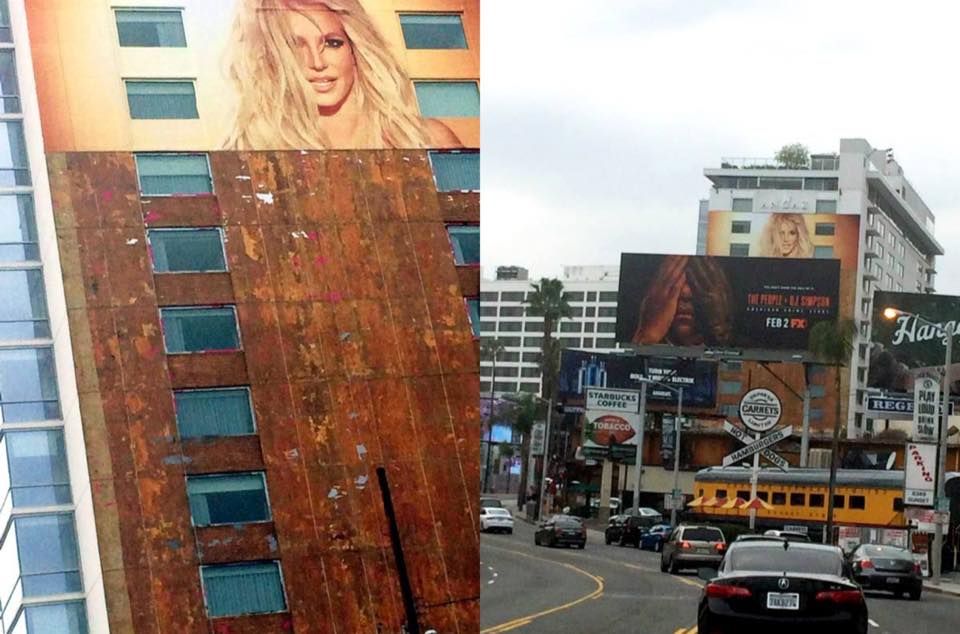 Comments are off
Published on In
Britney: Piece Of Me Videos

Here’s a new tv advert for Piece Of Me residency in Vegas.